Shawne Bug Leo carries on the legacy of his great sire, Shawne Bug by being a popular and proven sire. 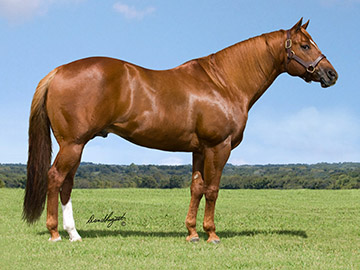 Shawne Bug Leo carries on the legacy of his great sire, Shawne Bug by being a popular and proven sire. Shawne Bug earned a speed index of 101, earned his ROM in racing and was named Superior Race Horse. He was the 1976 Blue Ribbon Futurity Winner and the 1977 Rocky Mountain QH Derby Winner. His grandget have earned over $12 million in race earnings and over $67,000 in futurities. Shawne Bug’s sire Lady Bug’s Moon is known in the horse industry for creating phenomenal speed horses and is known for leaving an impact on the race and performance industry as a leading sire. Lady Bugs Moon is highly desired in pedigrees and his genetics are considered a key factor in the success of the All–Time Leading Sire First Down Dash. Countess Edith was a AAA race winner with a speed index of 102 and earner of over $35,000. She was sired by the great producer, Count Giacomo and is a maternal sister to some great horses and producers themselves. She went on to produce 2x race winners.